This watercolor depicts a chimera, monstrous fire-breathing creature. It appears that chimeras exist not only in Greek mythology.

Bringing AI to the edge

Hello! I am in charge of AI at Alysophil. I also promote photonic computing. Before that, I contributed to a project which brought Deep Learning closer to hardware at Paris-Saclay University, France. And before that my affiliation was FEMTO-ST institute in Besançon, France. My main research interest is in the field of brain-inspired computing. The story began in May 2012, at the conference in Crimea, Ukraine where I attended a brilliant talk by Prof. Laurent Larger. I was already familiar with artificial neural networks, and the talk had further ignited my interest. I learned that those structures can be implemented with the help of a laser or even a bucket of water. That was my first encounter with reservoir computing. Eventually, I pursued my PhD tackling problems related to this fascinating subject. Recently, a conceptually simple deep reservoir computing method was published. During my PhD I have also contributed to the very first experimental observation of Chimera states in laser delay dynamics, which eventually led to observation of dissipative solitons in a multidelay setting. I have defended my PhD thesis "Theory and Modeling of Complex Nonlinear Delay Dynamics Applied to Neuromorphic Computing" with the congratulation of the jury.

In my free time I enjoy learning musical instruments and painting. I also explore robotics: having fun with self-driving cars, quadcopters, and other small projects.

Brain hacking and other projects 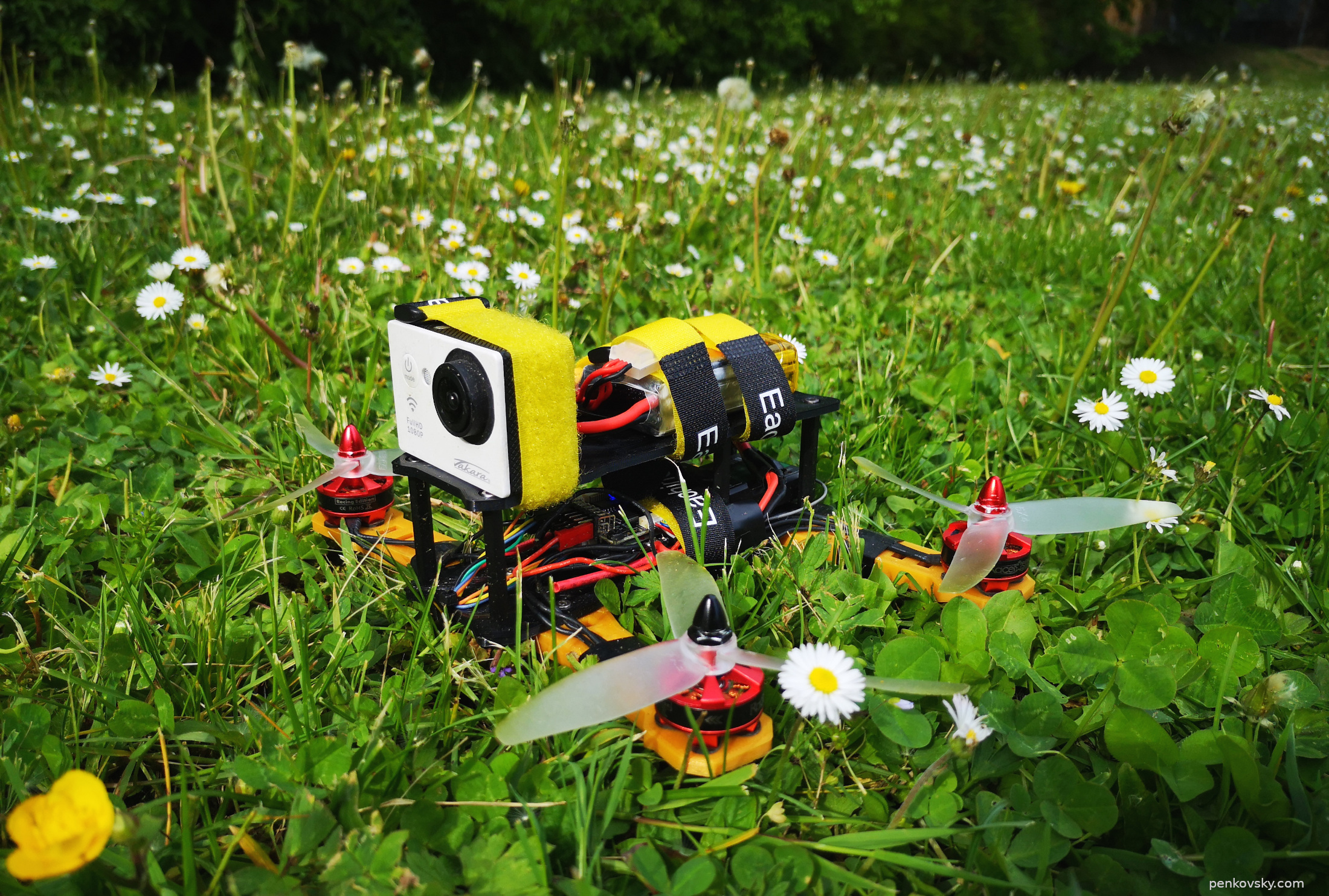 A Quadcopter From Scratch

Recently NASA has made the first powered flight on Mars. They have deployed a drone called Ingenuity costing about $85 million. The helicopter was able to fly on about ten meters altitude (as of May, 7) over the surface of the Red Planet. Coincidently, I have also built a flying drone. This looked like a good challenge and an opportunity to learn about unmanned aerial vehicles (UAVs). Here is what I learned.

Here is a step by step tutorial on how to design objects for 3D printing using OpenSCAD. We illustrate the design process by creating a micro quadcopter frame. This small drone bears the code name of Beatle-1. After following the tutorial you will be able to conceive your own designs for 3D printing. 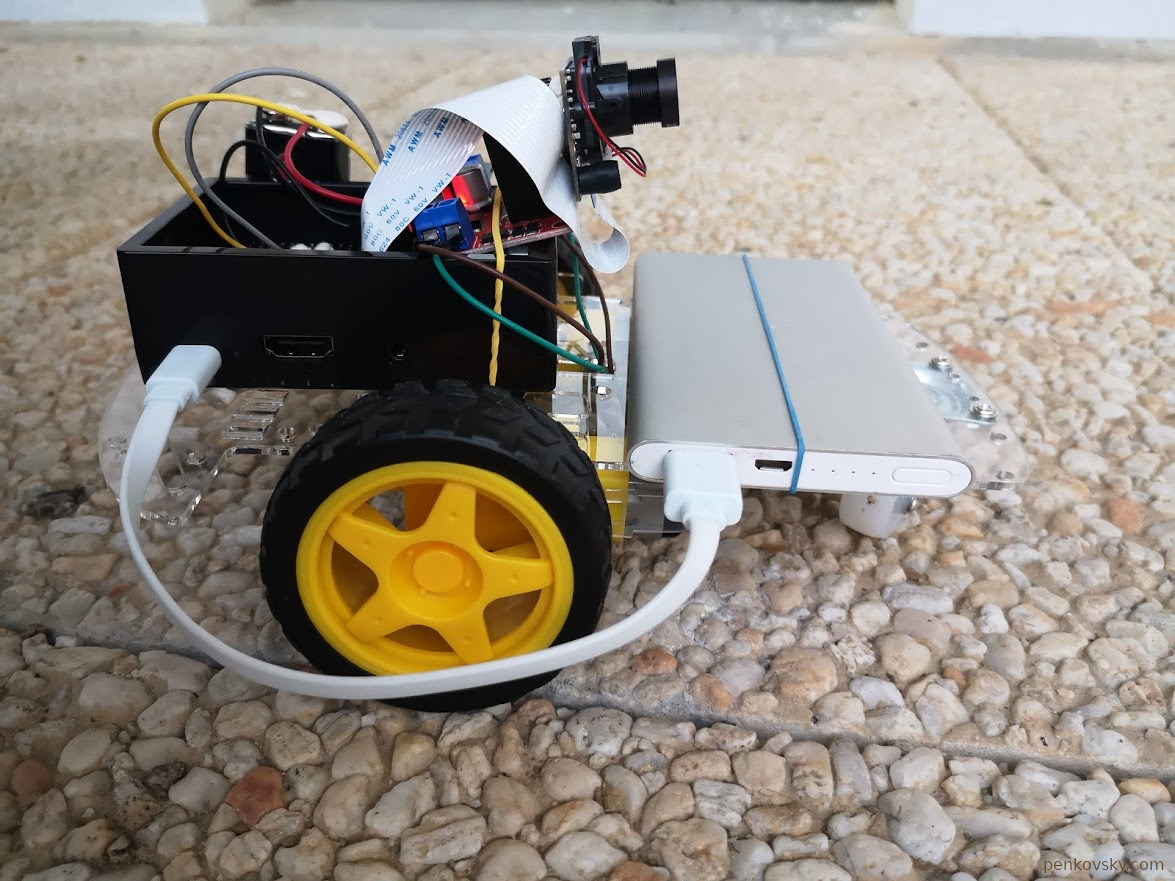 We will build an autonomous robot. Captured by robot's camera, video stream will be analyzed by a neural network. The network will be running on the onboard Raspberry Pi that will steer the robot. Before you start with the project, I want you to answer two questions. First, how everything will be attached mechanically? Second, what will be the energy source? While your autonomous robot can work from a cardboard box, having a mechanically sound chassis will greatly improve the result on the AI training stage.

Last week Apple has acquired XNOR.ai startup for amazing $200 million. The startup is known for promoting binarized neural network algorithms to save the energy and computational resources. That is definitely a way to go for mobile devices, and Apple just acknowledged that it is a great deal for them too. I feel now is a good time to explain what binarized neural networks are so that you can better appreciate their value for the industry. 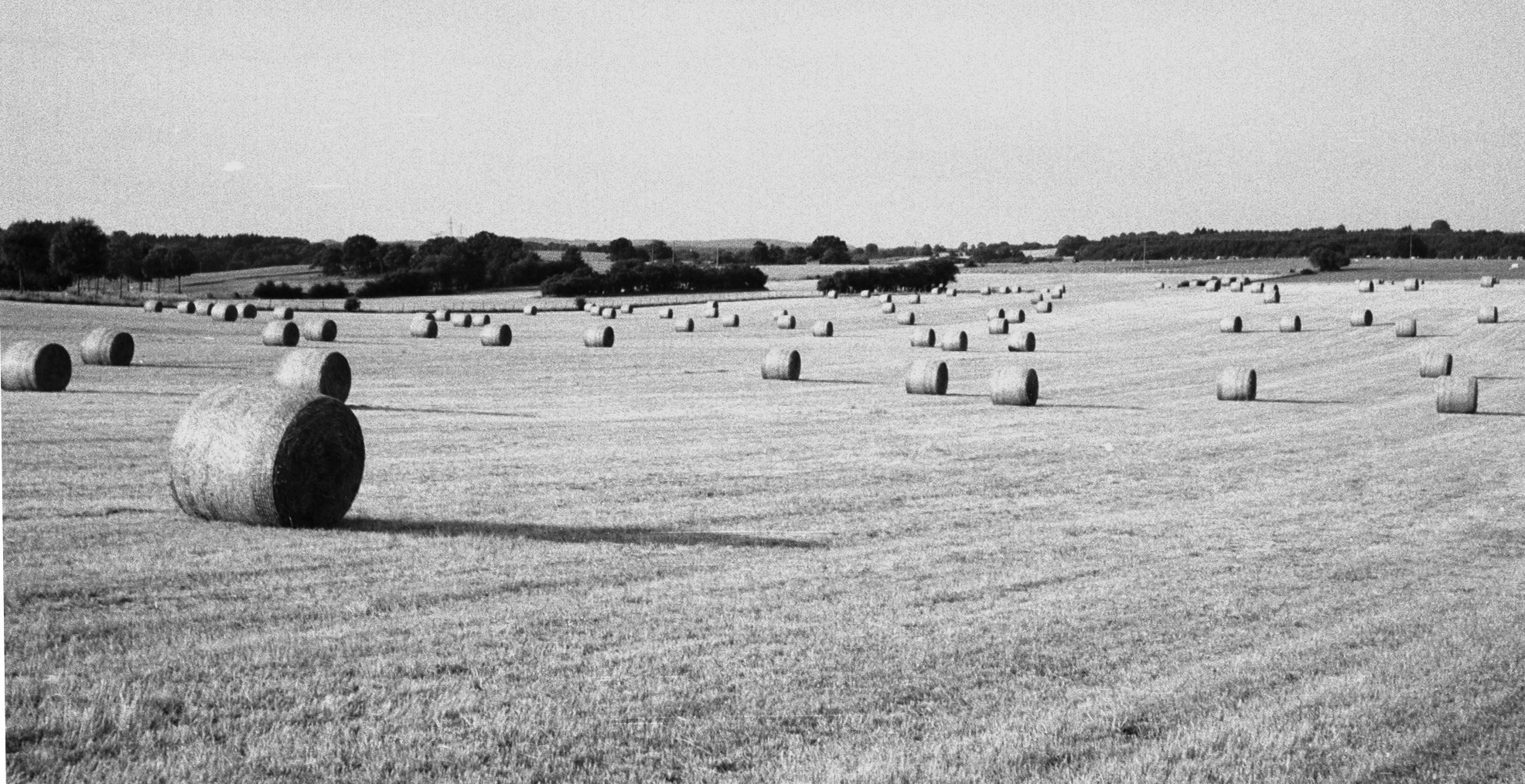 Today we will talk about one of the most important deep learning architectures, the "master algorithm" in computer vision. That is how François Chollet, author of Keras, calls convolutional neural networks (CNNs). Convolutional network is an architecture that, like other artificial neural networks, has a neuron as its core building block. It is also differentiable, so the network is conveniently trained via backpropagation. The distinctive feature of CNNs, however, is the connection topology, resulting in sparsely connected convolutional layers with neurons sharing their weights.

Which purpose do neural networks serve for? Neural networks are learnable models. Their ultimate goal is to approach or even surpass human cognitive abilities. As Richard Sutton puts it, 'The biggest lesson that can be read from 70 years of AI research is that general methods that leverage computation are ultimately the most effective'. In his essay, Sutton argues that only models without encoded human-knowledge can outperform human-centeric approaches. Indeed, neural networks are general enough and they leverage computation. 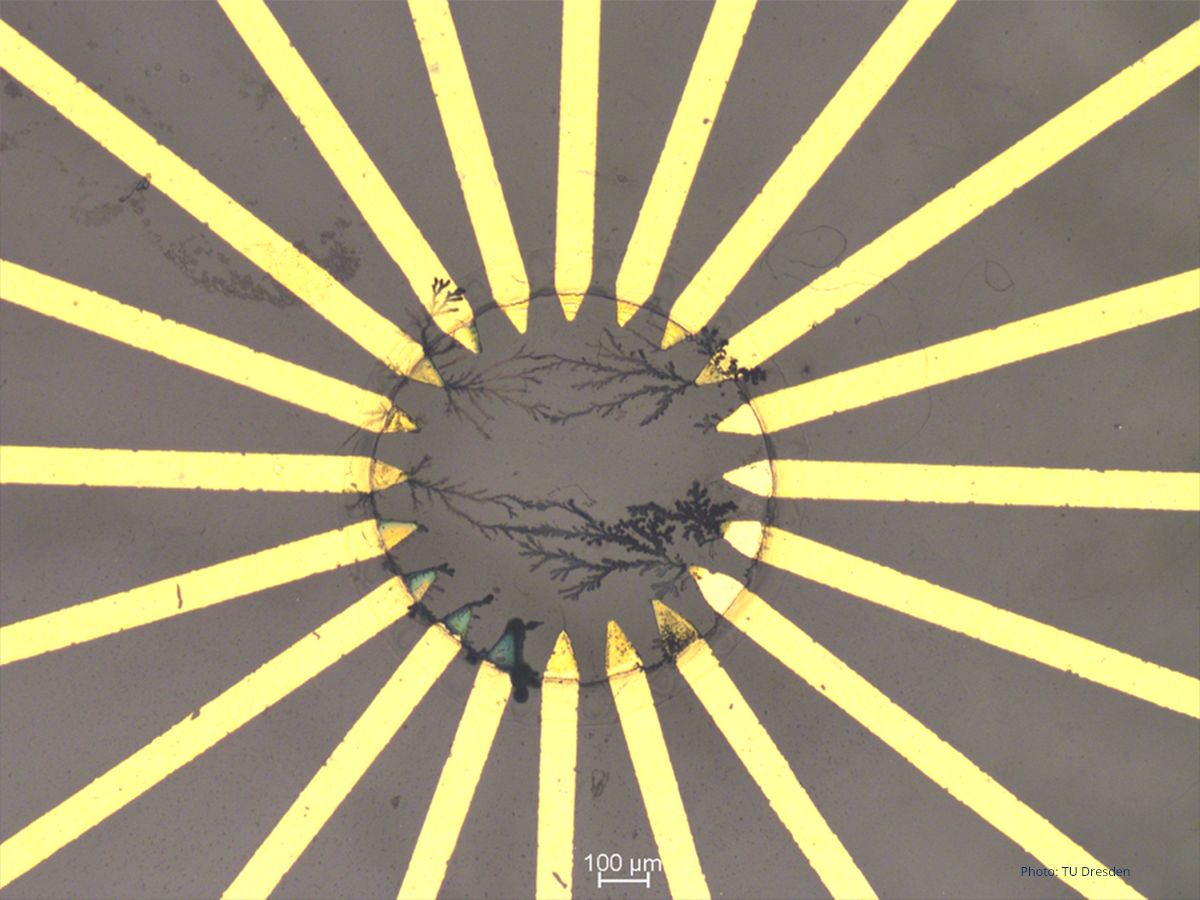 Early detection of malign patterns in patients’ biological signals can save millions of lives. Despite the steady improvement of artificial intelligence–based techniques, the practical clinical application of these methods is mostly constrained to an offline evaluation of the patients’ data. Previous studies have identified organic electrochemical devices as ideal candidates for biosignal monitoring. However, their use for pattern recognition in real time was never demonstrated. Here, we produce and characterize brain-inspired networks composed of organic electrochemical transistors and use them for time-series predictions and classification tasks using the reservoir computing approach. To show their potential use for biofluid monitoring and biosignal analysis, we classify four classes of arrhythmic heartbeats with an accuracy of 88%. The results of this study introduce a previously unexplored paradigm for biocompatible computational platforms and may enable development of ultralow–power consumption hardware-based artificial neural networks capable of interacting with body fluids and biological tissues.
Matteo Cucchi, Christopher Gruener, Lautaro Petrauskas, Peter Steiner, Hsin Tseng, Axel Fischer, Bogdan Penkovsky, Christian Matthus, Peter Birkholz, Hans Kleemann, Karl Leo
Science Advances, 2021
PDF Project Publication IEEE Spectrum

Neural networks are currently transforming the field of computer algorithms, yet their emulation on current computing substrates is highly inefficient. Reservoir computing was successfully implemented on a large variety of substrates and gave new insight in overcoming this implementation bottleneck. Despite its success, the approach lags behind the state of the art in deep learning. We therefore extend time-delay reservoirs to deep networks and demonstrate that these conceptually correspond to deep convolutional neural networks. Convolution is intrinsically realized on a substrate level by generic drive-response properties of dynamical systems. The resulting novelty is avoiding vector-matrix products between layers, which cause low efficiency in today's substrates. Compared to singleton time-delay reservoirs, our deep network achieves accuracy improvements by at least an order of magnitude in Mackey-Glass and Lorenz timeseries prediction.
Bogdan Penkovsky, Xavier Porte, Maxime Jacquot, Laurent Larger, Daniel Brunner
In PRL, 2019
Preprint Project Publication

Photonic delay systems have revolutionized the hardware implementation of Recurrent Neural Networks and Reservoir Computing in particular. The fundamental principles of Reservoir Computing strongly benefit a realization in such complex analog systems. Especially delay systems, potentially providing large numbers of degrees of freedom even in simple architectures, can efficiently be exploited for information processing. The numerous demonstrations of their performance led to a revival of photonic Artificial Neural Network. Today, an astonishing variety of physical substrates, implementation techniques as well as network architectures based on this approach have been successfully employed. Important fundamental aspects of analog hardware Artificial Neural Networks have been investigated, and multiple high-performance applications have been demonstrated. Here, we introduce and explain the most relevant aspects of Artificial Neural Networks and delay systems, the seminal experimental demonstrations of Reservoir Computing in photonic delay systems, plus and the most recent and advanced realizations.
Daniel Brunner, Bogdan Penkovsky, Bicky A. Marquez, Maxime Jacquot, Ingo Fischer, Laurent Larger
JAP, 2018
Project Publication 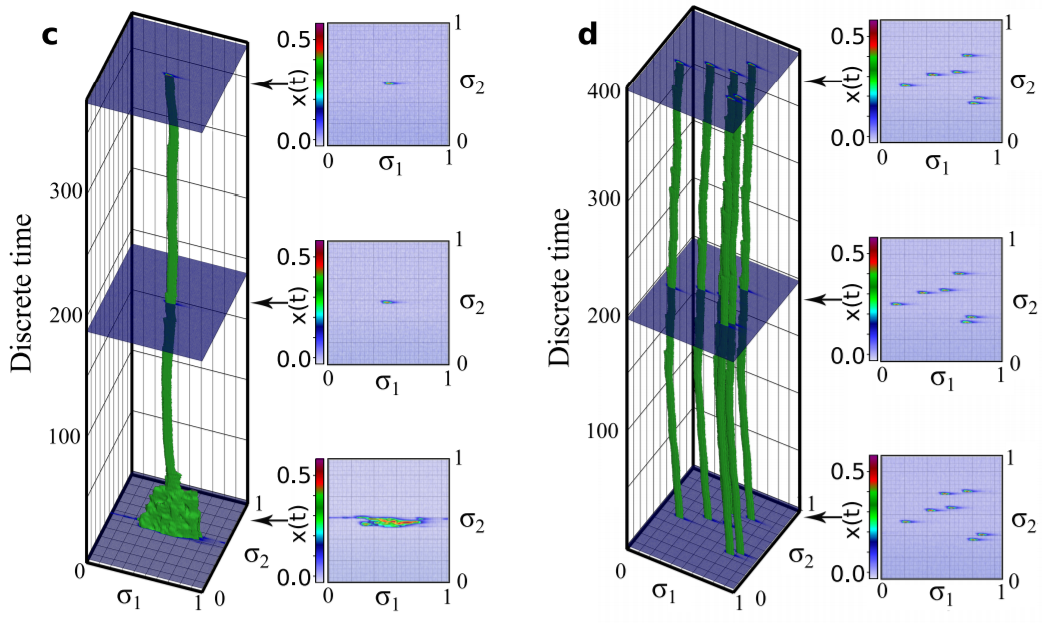 Laser chimeras as a paradigm for multistable patterns in complex systems

A chimera state is a rich and fascinating class of self-organized solutions developed in high-dimensional networks. Necessary features of the network for the emergence of such complex but structured motions are non-local and symmetry breaking coupling. An accurate understanding of chimera states is expected to bring important insights on deterministic mechanism occurring in many structurally similar high-dimensional dynamics such as living systems, brain operation principles and even turbulence in hydrodynamics. Here we report on a powerful and highly controllable experiment based on an optoelectronic delayed feedback applied to a wavelength tuneable semiconductor laser, with which a wide variety of chimera patterns can be accurately investigated and interpreted. We uncover a cascade of higher-order chimeras as a pattern transition from N to N+1 clusters of chaoticity. Finally, we follow visually, as the gain increases, how chimera state is gradually destroyed on the way to apparent turbulence-like system behaviour.
Laurent Larger, Bogdan Penkovsky, Yuri Maistrenko
In Nat. Commun., 2015
PDF Project 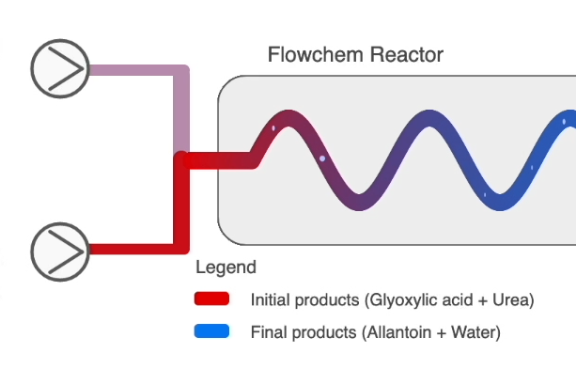 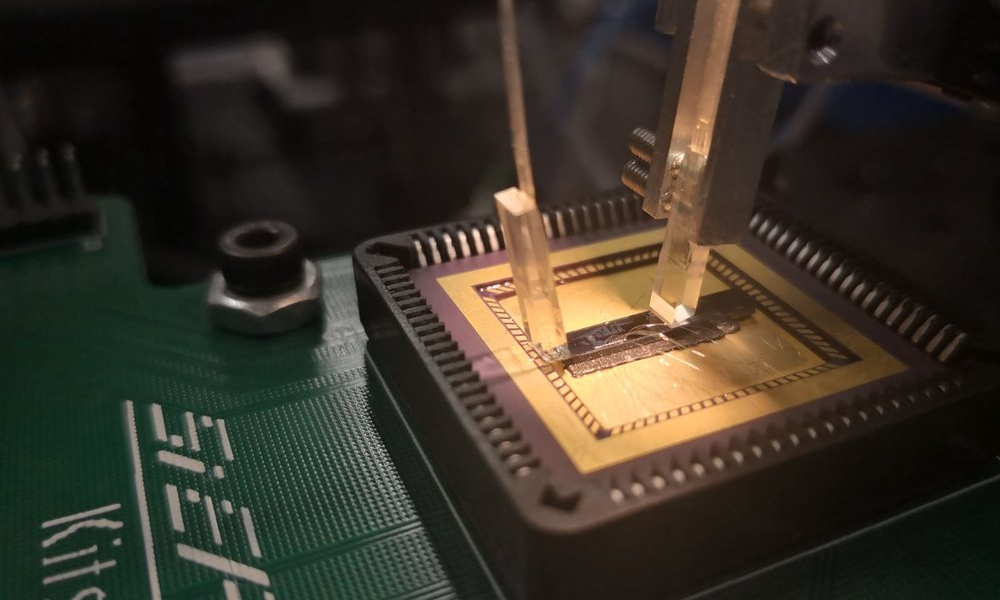 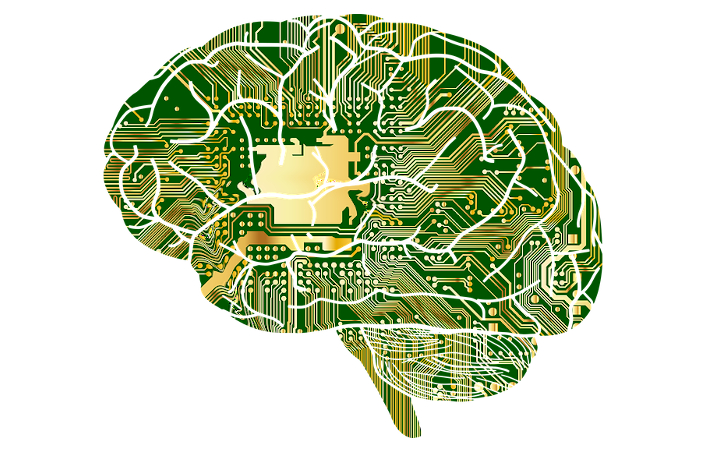 Bringing AI to the edge, to battery-powered devices and away from the cloud. 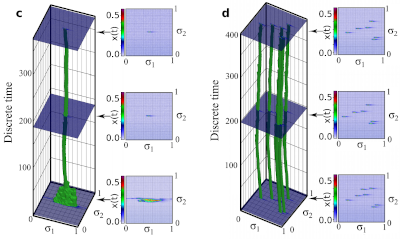 Conceiving next-generation computing principles inspired by biological systems such as the human brain. 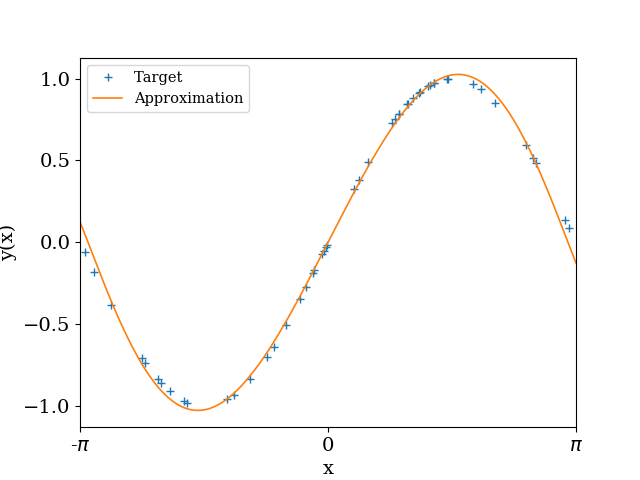 Multi Expression Programming is a genetic programming variant encoding multiple solutions in the same chromosome. The remarkable thing about MEP algorithms is that they are programs actually writing programs.