Handwritten digits from the MNIST dataset

Which purpose do neural networks serve for? Neural networks are learnable models. Their ultimate goal is to approach or even surpass human cognitive abilities. As Richard Sutton puts it, 'The biggest lesson that can be read from 70 years of AI research is that general methods that leverage computation are ultimately the most effective'. In his essay, Sutton argues that only models without encoded human-knowledge can outperform human-centeric approaches. Indeed, neural networks are general enough and they leverage computation. Then, it is not surprising how they can exhibit millions of learnable degrees of freedom.

The biggest challenge with neural networks is two-fold: (1) how to train those millions of parameters, and (2) how to interpret them. Batch normalization (shortly batchnorm) was introduced as an attempt to make training more efficient. The method can dramatically reduce the number of training epochs. Moreover, batchnorm is perhaps the key ingredient that made possible training of certain architectures such as binarized neural networks. Finally, batchnorm is one of the most recent neural network advances1.

The source code from this post is available on Github.

What Is A Batch?

Until now, we have looked on toy datasets. These were so small that they could completely fit into the memory. However, in the real world exist huge databases occupying hundreds of gigabytes of memory, such as Imagenet for example. Those often would not fit into the memory. In that case, it makes more sense to split a dataset into smaller mini-batches. During a forward/backward pass, only one batch is typically processed.

As the name suggests, batchnorm transformation is acting on individual batches of data. The outputs of linear layers may cause activation function saturation/'dead neurons'. For instance, in case of ReLU (rectified linear unit) $f(x)=\max(0, x)$ activation, all negative values will result in zero activations. Therefore, it is a good idea to normalize those values by subtracting the batch mean $\mu$. Similarly, division by standard deviation $\sqrt{\text{var}}$ scales the amplitudes, which is especially beneficial for sigmoid-like activations.

The batch normalization procedure differs between the training and inference phases. During the training, for each layer where we want to apply batchnorm we first compute the mini-batch mean:

Now, the batchnorm's heart, normalization itself:

where a small constant $\epsilon$ is added for numerical stability. What if normalization of the given layer was harmful? The algorithm provides two learnable parameters that in the worst case scenario can undo the effect of batch normalization: scaling parameter $\gamma$ and shift $\beta.$ After (optionally) applying those, we obtain the output of the batchnorm layer:

Please note that both mean $\mu$ and variance $\text{var}$ are vectors of as many elements as neurons in a given hidden layer. Operator $*$ denotes element-wise multiplication.

In the inference phase it is perfectly normal to have one data sample at a time. So how to calculate batch mean if the whole batch is a single sample? To properly handle this, during training we estimate mean and variance ($E[\mathbf{X}]$ and $\text{Var}[\mathbf{X}]$) over all training set. Those vectors will replace $\mu$ and $\text{var}$ during inference, avoiding thus the problem of normalizing a singleton batch. 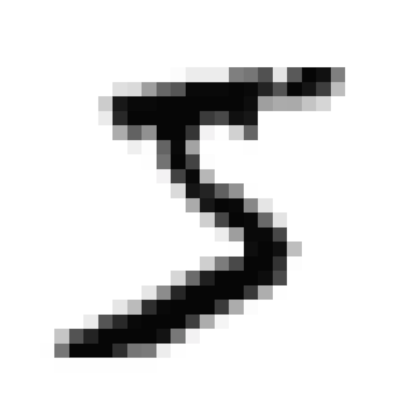 So far we have played with tasks that provided low-dimensional input features. Now, we are going to test neural networks on a bit more interesting challenge. We will apply our skills to automatically recognize human-written digits on a famous MNIST dataset. This challenge came from the need to have zip-code machine reading for more efficient postal services.

We construct two neural networks, each having two fully-connected hidden layers (300 and 50 neurons). Both networks receive $28 \times 28 = 784$ inputs, the number of image pixels, and give back 10 outputs, the number of recognized classes (digits). As in-between layer activations we apply ReLU $f(x) = \max(0,x)$. To obtain the classification probabilities vector in the result, we use softmax activation $\sigma(\mathbf{x})_i = \frac{\exp{x_i}}{\sum_{j=1}\exp{x_j}}.$ One of the networks in addition performs batch normalization before ReLUs. Then, we train those using stochastic gradient descent2 with learning rate $\alpha = 0.01$3 and batch size $m = 100$.

From the figure above we see that the neural network with batch normalization reaches about $98\%$ accuracy in ten epochs, whereas the other one is struggling to reach comparable performance in fifty epochs! Similar results can be obtained for other architectures.

It is worth mentioning that we still may lack understanding how exactly does batchnorm help. In its original paper, it was hypothesized that batchnorm is reducing internal covariate shift. Recently, it was shown that that is not necessary true. The best up-to-date explanation is that batchnorm makes optimization landscape smooth, thus making gradient descent training more efficient. This, in its turn, allows using higher learning rates than without batchnorm!

We will base our effort on the code previously introduced on Day 24. First, we will redefined the Layer data structure making it more granular:

Amazing! Now we can distinguish between several kinds of layers: affine (linear), activation, and batchnorm. Since batchnorm already compensates for a bias, we do not actually need biases in the subsequent linear layers. That is why we define a Linear' layer without biases. We also extend Gradients to accommodate our new layers structure:

Next, we want to extend the neural network propagation function _pass, depending on the layer. That is easy with pattern matching. Here is how we match the Batchnorm1d layer and its parameters:

As previously, the _pass function receives an input inp and layer parameters. The second argument is the pattern we are matching against, making our algorithm specific in this case for (Batchnorm1D ...). We will also specify _pass for other kinds of Layer. Thus, we have obtained a polymorphic _pass function with respect to the layers. Finally, the equation results in a tuple of three: gradients to back propagate dX, predictions pred, and prepended list t with values BN1 computed in this layer (batch mean batchMu, variance batchVariance, and learnable parameters gradients).

As discussed on Day 2, there is a recurrent call obtaining gradients from the next layer, neural network prediction pred and computed values tail t:

I prefer to keep the backward pass without any simplifications. That makes clear which step corresponds to which:

Note that often we need to perform operations like mean subtraction $\mathbf{X} - \mathbf{\mu}$, where in practice we have a matrix $\mathbf{X}$ and a vector $\mathbf{\mu}$. How do you subtract a vector from a matrix? Right, you don't. You can subtract only two matrices. Libraries like Numpy may have a broadcasting magic that would implicitly convert a vector to a matrix5. This broadcasting might be useful, but might also obscure different kinds of bugs. We instead perform explicit vector to matrix transformations. For our convenience, we have a shortcut b = br (rows inp) that will expand a vector to the same number of rows as in inp. Where function br ('broadcast') is:

Here is an example how br works. First, we start an interactive Haskell session and load NeuralNetwork.hs module:

As we can see, a new matrix with three identical rows has been obtained. Note that a has type Array U Seq, meaning that data are stored in an unboxed array. Whereas the result is of type Array D Seq, a so-called delayed array. This delayed array is not an actual array, but rather a promise to compute6 an array in the future. In order to obtain an actual array residing in memory, use compute:

You will find more information about manipulating arrays in massiv documentation. Similarly to br, there exist several more convenience functions, rowsLike and colsLike. Those are useful in conjunction with _sumRows and _sumCols:

Note that softmax is different from element-wise activations. Instead, softmax acts as a fully-connected layer that receives a vector and outputs a vector. Finally, we define our neural network with two hidden linear layers and batch normalization as:

In both cases the output softmax activation is omitted as it is computed together with loss gradients in the final recursive call in _pass:

Here, [] on the left-hand side signifies an empty list of input layers, and [] on the right-hand side is the empty tail of computed values in the beginning of the backward pass.

The complete project is available on Github. I recommend playing with different neuron networks architectures and parameters. Have fun!

There are several potential traps when using batchnorm. First, batchnorm is different during training and during inference. That makes your implementation more complicated. Second, batchnorm may fail when training data come from different datasets. To avoid the second pitfall, it is essential to ensure that every batch represents the whole dataset, i.e. it has data coming from the same distribution as the machine learning task you are trying to solve. Read more about that.

Despite its pitfalls, batchnorm is an important concept and remains a popular method in the context of deep neural networks. Batchnorm's power is that it can substantially reduce the number of training epochs or even help achieving better neural network accuracy. After discussing this, we are prepared for such hot subjects as convolutional neural networks and reinforcement learning. Stay tuned!